Every city that I’ve visited in China has its own spirit and character, but Nanjing is unique for its “cultured and relaxed” (according to the Lonely Planet’s guide to China) atmosphere. Of course, one’s impressions of a place are largely and in some cases solely guided by the bits of the elephant that one gets to touch in a dark room. In my case, the first bits were my friends Wang Xuehua (Holly), and Tony Ling, professors who participated in a visiting scholar program last year at UTK, who came to the Nanjing South railway station to meet my train and then hosted me at a dinner at my hotel. Tony ordered everything very consciously; in fact, he was the first of several people to carefully order different dishes so that I would get a “taste of China.” 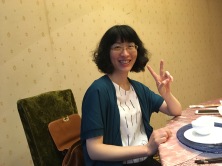 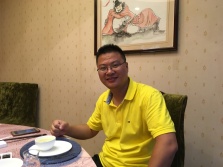 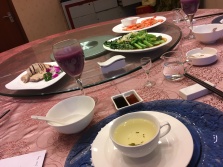 So my first experience of Nanjing was of the warmth and kindness of these two friends. Tony was traveling the following week, so this was my only opportunity to see him during the trip (we would have met again a week later but for an unfortunate indisposition on my part after a visit to an American restaurant).

As I mentioned elsewhere, traveling in a country where one cannot read is particularly difficult. But I felt strengthened and protected because I knew these two friends– and Min Bao, Ellen– were there in case I needed them.

However, I have met everywhere with a dignified kindness on the part of just about everyone I have encountered and in fact have never felt in danger at all. Confused, yes. Bewildered, sometimes. Worried, occasionally. But in danger, no.

This prompts me to wonder how we welcome strangers in the US. In many cases, I think we are also hospitable; I know that many Americans have welcomed our students into their homes, though some, to their shame in my opinion, have only done so as long as they thought they could convert the strangers to their version of Christianity; failing in that mission, their friendliness has vanished, leaving some very hurt young people.

But there is a wildness to the present scene in the US that I am not finding in China, and it is not a good wildness. It is a dear Chinese student, a very cultured and refined young woman, being confronted by a toothless, homeless harridan who cursed her out and told her to go back to “Japan” and then pulled down her pants in broad daylight to “moon” her. What kind of person does that? A person who is ill and homeless and destitute and not being taken care of, a person who feels the scorn of society and scorns back at a victim she feels to be more marginalized than she is.

We have taken our ethos of “laissez-faire”–let things operate without intervention–too far. We have become a mixed-up nation without guiding principles. We no longer coherently know when to comfort people, what to teach them, and when (or when not) to punish. We have so many good people trying to do good things, but the results are not good overall because we’re not talking to each other.

Perhaps one thing we all need to do is first to refresh ourselves on what binds us together–the acknowledgement that we are a nation of people who make and agree to laws and that no one is above those laws–and secondly to perhaps acknowledge what we already are–a nation of immigrants whose mission is to create our own spirit, an amalgam of everyone we are. Personally I would base that spirit on kindness, because–why not?  Why not choose kindness as a guiding principle, as opposed to punitiveness or exclusion? Why not live in the best way we can instead of finding ways to make life worse for others?

One thought on “Nanjing and Kindness”