…used to mean something completely different

These words, so often used to express a great admiration for someone or something, didn’t originally mean what most people think they mean.

“Fantastic” comes from the Greek phantazein, or imagination. It’s related to the English “phantasm,” or a ghost, imaginary creature, nightmare creature. So “fantastic” really means “unreal.” Think about that the next time you use the word. In the picture, the ghost of her mother is appearing to a young girl as she kneels to pray.

“Fancy” is a word derived from “fantasy,” interestingly enough, so something that is “fancy” is not necessarily real, either, at least in historical terms. Nowadays, “fancy” just means “complicated and pretty,” like these fancy hats from long ago. It no longer means “fantasy” except in something like the question, “What do you fancy?” (“What do you want to eat or drink or buy?”) or the phrase “fancy free,” which I suppose means “free in one’s imagination, able to do anything one wants to do” (commonly associated with being single, not engaged or married). 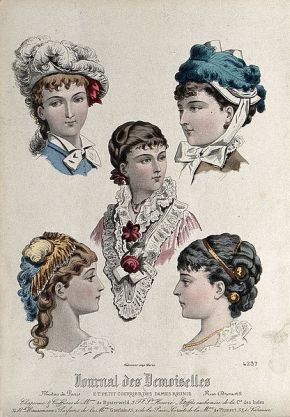 Similarly, “fabulous” comes from Latin fabula, or tale, story. So a “fabulous” creature is not something that’s necessarily very cool. It’s more likely to be something like the Loch Ness monster–a story, a figment of the imagination, a fable, something you’ve heard of but never seen and which doesn’t exist. Here’s a picture of a yeti; looks like he’s got a lot on his mind.