I don’t know why, but this picture of the Riverside Church in Manhattan is particularly beautiful to me; I wish I had been able to crop the car out, but I was taking the photo from my bicycle seat, so perhaps my perspective was not the best. It is somehow more like an etching than a photograph. It captures what I have always loved best about some stone churches–their lightness, their delicacy, despite being built of the heaviest substance builders have at their disposal. Here’s another photo by a “BonCJ” that I found:

I find to my surprise that it is not an Episcopal church at all, but a famous inter-denominational church (that is, a church that is free to all), with a long history of social activism. People I approve of have preached here. Here’s what Wikipedia notes about the people who have spoken here at various important moments in the nation’s past:

Martin Luther King Jr. voiced his opposition to the Vietnam War at Riverside on April 4, 1967, also known as Riverside Church speech. The Rev. Jesse Jackson gave the eulogy at Jackie Robinson’s funeral service in 1972. Bill Clinton spoke at Riverside Church on August 29, 2004.  Secretary-General of the United Nations Kofi Annan spoke there after the September 11, 2001 attacks. Cesar Chavez, Jesse Jackson, Desmond Tutu, Fidel Castro, Arundhati Roy and Nelson Mandela have all spoken at Riverside Church. Other past speakers include such theological superstars as Paul Tillich, Reinhold Niebuhr and Dietrich Bonhoeffer, a German who was instrumental in the Christian resistance against the Third Reich, and Channing E. Phillips, a leader in the African-American Civil Rights Movement and the first African-American to receive votes as a presidential nominee at a Democratic National Convention. Rev Dr C Welton Gaddy President of Interfaith Alliance of Washington, DC. On January 15, 2012, a commemoration celebration for Martin Luther King Jr. took place at the Riverside Church, which included appearances by Patti Smith and Yoko Ono.

OK, I confess I’m not thrilled about Yoko Ono. Like many I blame her for breaking up the Beatles.

This is the thing about New York City. It’s the pulsing heart of the nation, really, in many ways. It’s where anything at all can happen because everyone is there, at one time or another. For example, just a little way south, I found this: A man out for a walk with his dog had tired the dog out and kneeled for at least 20 minutes caressing and crooning to it. I watched the pair for a long time, watched this loving relationship between a man and his dog. In its way, that extraordinary tenderness fit right in to New York as I remembered it. 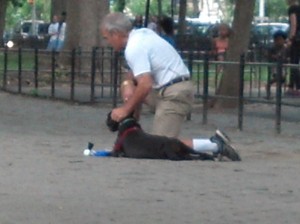 I don’t feel equal to New York anymore; it’s too big for me now. The players are too accomplished for the likes of me. But still, drifting down the west side of Manhattan along the people’s parks, I felt netted in the city’s people, caught like a fish that does not want to escape.

2 thoughts on “Traveling forward into the past”