So we were talking about Donald Trump and his 4th-grade vocabulary level.

Trump is still doing well in the polls as of mid-August, 2015, though that could change this week, or next, or the next.

And he is doing well despite the insults that…he is hurling right and left–insults toward women he thinks are ugly, insults towards Latinos (the vast majority of whom are working hard constructing buildings and cutting lawns and keeping their heads down in hopes of not being noticed), insults towards the same politicians he has bought and paid for with his “yuge” (huge) fortune. He’s doing well despite the fact that everyone who displeases him gets the schoolboy taunts of “dummy” and “loser.” 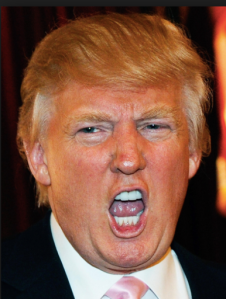 To put it mildly, Trump’s an entitled bully. Born wealthy, he shouts, he postures, and his hair is a monument to an obscene male vanity. He preens, he flatters himself, all right out in front of the national stage. Everything he has ever wanted, he has gotten. When his wives begin to show some age, he replaces them. And he can buy their acquiescence to the narrative he chooses. Ivana Trump, in the heat of divorce and before she got her settlement, said he had raped her. Now, bought, she denies it was rape.

How can he be doing so well? Why does he not disgust people instead of entrancing them?

The key is precisely in his 4th-grade language.

In general, the most important quality a politician (or anyone) can have is that people trust him to be a straight shooter, to tell the truth.

Truth, in English, is told at Level I.  The strongest truth from the heart is not “I detest you,” or “I strongly deprecate your existence,” but plain old (and short) “I hate you.” “Detest” comes from French, “deprecate” from Latin, and “hate”–surprise–from the Germanic ancestor language, Anglo-Saxon. “Heissen” is the modern German word. You can see the family resemblance for yourself.

And that’s why people believe he speaks the truth. He’s not stupid, not at all. He’s smart enough to know that simple language is the language people believe. They think it shows honesty. Poor them.

Tomorrow, I’ll show you an interesting comparison of the rhetoric of George W. Bush, who ended his presidency as a reviled figure whom even his own party can’t bear to mention, and Bill Clinton, who ended his two terms riding high on a tide of popularity. The results are quite interesting.

2 thoughts on “The Role of Plain Language in Politics”